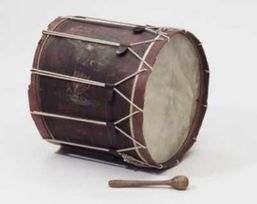 The roots of the bass drum were first seen in Africa, Nicaragua, Honduras, and Guatemala. The smaller drums were known as primero and the larger bass drum known as segunda. The bass drum as we know it made its way through Turkey and Europe in the form of davul, which was viewed as the European version of the Arabic tabl. The heads of these drums were made from various animal skins and produced sound when the player struck the head with a stick in each hand. By the 19th century the drum had grown in size and was mounted on a frame at a horizontal angle. 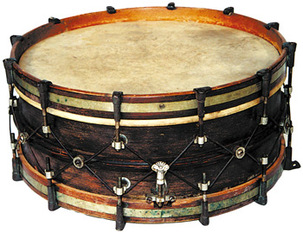 The bass drum was not alone when traveling to Europe. Its accompaniment was a pair of drums called nakers which came from the Arabic naqqara. These instruments were very similar to Persian and Arabic kettle drums, except in Europe the drum was suspended from the player's belt. In the 15th century, Swiss soldiers marched to the beat of a fife, which was hung on the drummer's side at a 45-degree angle and was played in traditional grip. At this time the snare had moved to the resonant head, and for the time multi-stroke techniques such as flams, ruffs, and drags were used. 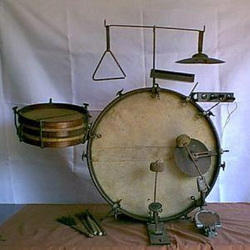 The tom-tom of the modern drum kit is a descendant of eastern Asian drums. Many of China's drums were barrel shaped, ranging from small sizes to six feet in diameter. The types of drums in China had a painted and decorated shell and had two heads that were also decorated on the top and bottom of the drum, which were nailed in so no tuning was necessary. Later in the 20th century these drums made it to America and were first put in with early trap kits. In 1930, for the first time, tom-toms were made with tunable bottom and top heads. The most common configuration of these drums was a four piece setup, which included a snare, a bass drum, a mounted tom and then a floor tom. 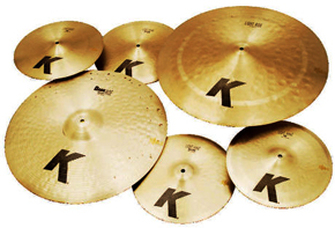 The final element to find its home on the modern drum set was the hi-hat, since cymbals were already part of the kit. Cymbals were actually first used in the Ottoman Empire for daily rituals and ceremonies. Almost 300 years later the hi-hat came to mind since the bass drum had already evolved to be played with a drummer's foot. Drummers wanted to be able to use all four limbs, and now that their left occupied the hi-hat stand, they had accomplished what  they wanted. Other types of cymbals were put on stands behind the rest of the kit and raised so they could easily be played. Once the hi-hat was added, the modern drum set was born.